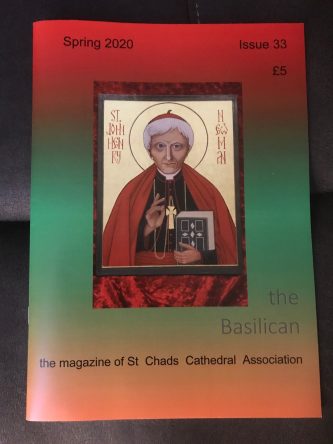 Have you a flair for writing? Passionate about the written word?

Then the Basilican magazine needs you!

The official magazine of St Chad’s Cathedral, published twice a year, is packed full of interesting articles and has readers from as far afield as the USA and New Zealand!

The editorial team is currently on the lookout for extra support with sourcing, and writing, articles.

St Chad’s was the first Catholic Cathedral erected in Great Britain in 1841 following the Reformation of the 16th Century. It was designed by the great Gothic Revivalist Augustus Welby Pugin, who was also responsible for the Palaces of Westminster and the iconic clock tower of Big Ben. The Cathedral celebrated its centenary in 1941 and was designated a Minor Basilica by Pope Pius XII.

The next edition of the Basilican is out in October, and will feature several articles relating to life in lockdown.

But the team are also interested to receive articles on subjects including:
– What people have done for or at the cathedral
– Pugin and his contemporaries (eg 16th Earl of Shrewsbury or George Myers, the builder of St Chad’s)
– St Chad’s and its role in the Catholic community
– Life in our cathedral schools and parishes

The first edition of the Basilican was published in Spring 2003 and edited by Sean O’Donnell and Anne Symonds (who remains the editor today).

“The magazine started off in black and white with very limited articles,” said Anne.

“At first articles were only about the cathedral itself and the people who worked within its walls.

“Gradually I opened it up to the whole of the diocese and any building of Pugin design within England.

“Special events in the cathedral were also covered, including 175 years of St Chad’s.

“In 2013 we decided to make it a colour magazine and each issue features a different cathedral treasure on its cover.

“We also include articles from our Anglican neighbours and from our friends across the city.”

The magazine is published in March and October and sent to every member of St Chad’s Cathedral Association as part of their subscription.

Members hail from the USA, New Zealand, Scotland and Cornwall as well as many across the Diocese.

Copies of the £5 magazine are sold at the back of the Cathedral; in St Paul’s Bookshop and in the reception of Cathedral House.

If you are interested in writing for the Basilican please contact Anne Symonds via email or call 0121 249 1487.