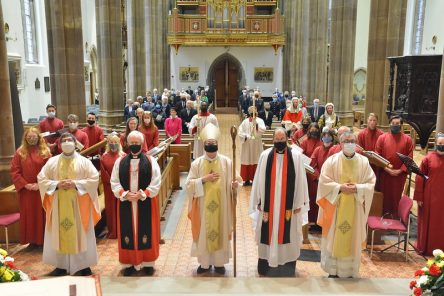 The annual Civic Mass took place at St Chad’s Cathedral on Saturday 20 November, on the Solemnity of Christ the King.

Bishop David Evans was the Principal Celebrant and Preacher at the Mass, which is a special occasion in the Cathedral calendar as a number of civic dignitaries, members of the Judiciary, Service Chiefs and representatives from Ecumenical and Faith groups gather to celebrate the great and diverse City of Birmingham.

Due to the ongoing pandemic it was a smaller congregation than usual but still a wonderful opportunity to share a moment of prayer for all those who contribute and continue to work together for the common good.

Amongst the guests were Cllr Mohammed Azim, Deputy Lord Mayor, and Professor Deirdre Kelly, a Diocesan Trustee and Deputy Lord Lieutenant, who gave the first reading.