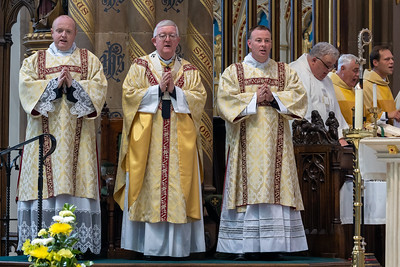 Prayerful congratulations to Andrew Lansberry and Martin Casey who have been ordained as permanent deacons to the Archdiocese of Birmingham.

Archbishop Bernard Longley ordained Andrew and Martin to the Permanent Diaconate in front of their families, friends and fellow Deacons at St Chad’s Cathedral on Sunday (17 July).

There are around 80 deacons serving in the Archdiocese of Birmingham.

Andrew, by profession a funeral director in Coventry, first realised that he might have a vocation while serving in the parish of St John Vianney as a young man.

His priestly formation has principally taken place at St Mary’s College, Oscott and in his own parish.

“One of the most important aspects of formation is the support network that is put in place as you begin your studies,” said Andrew, 42, who was born in Marston Green. “The seminary staff along with my formation tutor and the priests of my parish have continually encouraged and supported me for the duration of my formation.”

Martin, 36, who was born and raised in Nottingham, has been a full-time teacher at Archbishop Isley Catholic School in Birmingham for the past 11 years.

His two passions within the Church are liturgy and catechesis and a highlight of his formation at St Mary’s College, Oscott was his admission to candidacy when he heard the words spoken by the Bishop: “May God who has begun the good work in you bring it to fulfilment.”

Martin, who says he is “humbly excited” at the prospect of his ordination, said: “At Mass and during Adoration we should feel, and encourage others to feel, a sense of numinous beauty – of awe and wonder in the Presence of God.”

Find out more about Becoming a Deacon