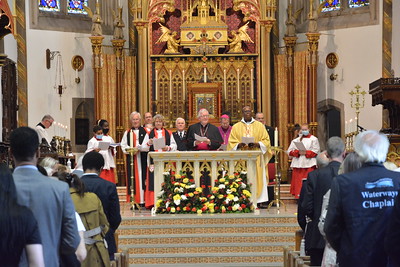 St Chad’s Cathedral was a joyous place to be as a Service of Praise took place to welcome the Commonwealth Games.

Churches across the city have worked together to organise and host the ecumenical service just days before the Games begin.

The service began with a procession of church leaders.

Archbishop Bernard Longley delivered words of welcome followed by greetings from the Lord Lieutenant and the Lord Mayor.

The service featured prayers, readings, music and song with input from the Birmingham City Council Workplace Choir and the Smile Community Children’s Choir.

Followed by David Moorcroft OBE, this year’s High Sheriff of the West Midlands, and a former middle-distance and long-distance runner, and former world record holder for the 5,000 metres.

After the service the congregation gathered outside the cathedral and sang ‘Lean on Me’.

Watch! Videos from the Service of Praise: