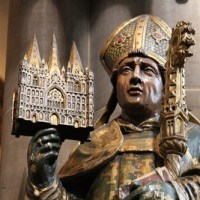 St Chad’s was built between 1839 and 1841 to serve the rapidly expanding Catholic population in Birmingham through the inspiration of Bishop Thomas Walsh, the Vicar Apostolic of the Central District. It replaced a Georgian classical chapel built in 1808 by William Hollins. The present Cathedral was designed in north German 13th century style by Augustus Welby Northmore Pugin (1812-1852), the world famous pioneer of Gothic revival architecture, and was consecrated on 21 June 1841 by Bishop Walsh. [Read more].

St Chad’s is one of Birmingham’s architectural and artistic gems and possesses a large collection of medieval furnishings and carvings collected by Pugin. He was the pioneer of the Gothic revival in England and, until his early death in 1852 aged 40, designed many cathedrals, churches and convents with their furnishings and contents in England, Ireland and Australia. Pugin was also responsible for much of the interiors of the Houses of Parliament in London. Three of Pugin’s sons, Edward, Cuthbert and Peter Paul, also worked in the Cathedral. His grandson, Sebastian Pugin Powell, designed St Edward’s Chapel which was consecrated in 1933. [Read more]

St Chad, the Apostle of the Midlands, was born in Northumbria, one of four brothers, all of whom became priests. He was educated partly at Lindisfarne under St Aidan and partly in Ireland. He succeeded his brother St Cedd as Abbot of Lastingham in Yorkshire in 664. [Read more]