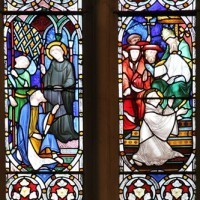 St Chad’s was built between 1839 and 1841 to serve the rapidly expanding Catholic population in Birmingham through the inspiration of Bishop Thomas Walsh, the Vicar Apostolic of the Central District. It replaced a Georgian classical chapel built in 1808 by William Hollins. The present Cathedral was designed in north German 13th century style by Augustus Welby Northmore Pugin (1812-1852), the world famous pioneer of Gothic revival architecture, and was consecrated on 21 June 1841 by Bishop Walsh. The Cathedral is built of brick with Bath stone dressings. The south-west spire was added by Pugin’s eldest son, Edward Welby, in 1856 in memory of Canon John Moore (Administrator 1841-1848).

St Chad’s was the first Catholic cathedral erected in England since the Reformation. It became the Cathedral formally in 1850 when Pope Pius IX restored the Catholic hierarchy of England and Wales. Cardinal John Henry Newman preached at Bishop William Ullathorne’s enthronement as the first Bishop of Birmingham and on many subsequent occasions. The Chapter of Canons was established in 1852.

In 1941 St Chad’s was made a minor basilica by Pope Pius XII on the occasion of its centenary. A minor basilica is a church which enjoys a special association with the Pope and is entitled to have the papal coat-of-arms above the front door. The privileges of a basilica include the use of the symbols that are placed in the Cathedral on great occasions. The ‘conopoeum’, a small umbrella of red and gold silk, was formerly carried over the Pope when he travelled on horseback on official visits. The ‘conopoeum’ also surmounts the Cathedral coat-of-arms. The ‘tintinnabulum’ is a lattice-work tower containing a bell, which was used to warn people of the Pope’s approach. The Canons of the Chapter wear the scarlet and purple ‘cappa parva’ for choir dress.

St Edward’s Chapel was added in 1933 by Sebastian Pugin Powell, Pugin’s grandson, as a memorial to Archbishop Edward Ilsley, 2nd Bishop and 1st Archbishop of Birmingham. In November 1940 a bomb came through the Cathedral roof, bounced on the floor and exploded when it hit the central heating pipes. The pipes burst and the water extinguished the bomb, thus saving the Cathedral from destruction.