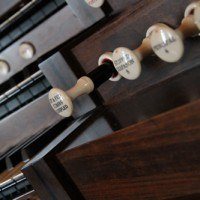 St Chad’s Cathedral Choir dates from 1841, when the Cathedral was opened. In 1854, John Hardman set up an endowment for the choir, the first English catholic choir to be supported in this way and this long and distinguished choral tradition continues today. In 2000, a re-organisation resulted in the establishment of a professional adult choir to sing at the principal services in the cathedral. The Choir, many of whom are staff and students at Birmingham Conservatoire, sing at the High Mass on Sundays, holydays of obligation and on the other major liturgical occasions during the year. The repertoire ranges from plainsong to contemporary mass settings and anthems with a particular emphasis on renaissance polyphony. There have been several broadcasts on BBC Radio 4.

St Chad’s Cathedral Choral Outreach Programme provides opportunities for young singers through school projects and the Junior Choir which is based at the Cathedral. Led by long-standing choristers David and Alexandra Wynne, the programme has the following aims:

We work with the Catholic Primary Schools Partnership to provide music training events for teachers. For further information, visit http://www.bcpp.org.uk

For more information, please contact Alexandra and David at choralout-reach@rc-birmingham.org

As a conductor, David is Musical Director of Birmingham Festival Choral Society and Ryton Chorale in Worksop. David is a long-standing member of The St. Chad’s Cathedral as well as working as a freelance soloist and consort singer.

Alexandra graduated from Birmingham Conservatoire in 2012 with BMus(Hons) inVocal and Operatic Studies, having undertaken some of her training at the Conservatoire National Supérieur de Musique in Lyon. She held a Choral Scholarship at St Martin-in-the-Fields in 2013 and has been a chorister at St Chad’s Cathedral since 2008. Alexandra was a member of Genesis Sixteen, The Sixteen’s choral training programme led by Harry Christophers and now performs regularly as a soloist and ensemble singer.

Alexandra is also the Director of Choirs at Work Ltd, an award-winning company providing choral training to organisations across the UK, as well as a choral director and singing teacher at Birmingham Conservatoire Junior Department and King Edward VI Five Ways Grammar School in Birmingham.

As part of the Cathedral’s 150th anniversary restoration the firm of J. W. Walker & Sons was commissioned at the end of 1990 to build a new organ for St Chad’s Cathedral, Nicolas Kynaston having been appointed as Organ Consultant in 1988. The decision was soon taken that the only place where choir and organ could be together was in the west gallery, as originally intended by the Cathedral’s architect Augustus Welby Pugin. The organ case and gallery were designed by David Graebe in late medieval style, with decoration by Gordon Foster.

The disposition of the organ within the case is very traditional: the Great occupies the centre of the main case with the Swell above and the Pedal department divided in towers on either side; the Positive is on the front of the gallery behind the player’s back, all controlled by mechanical action with electric stop action and a wide range of adjustable aids to registration. There are 6 pistons to each division and 6 general pistons, with a stepper and 96 channels of memory for each of the 8 memory cards.

The classical layout and the clear choruses on all four divisions make it suitable for music of the seventeenth and eighteenth centuries, whilst versatility is ensured as the principals on each department are complemented by a variety of colourful stops, including those required by the baroque French tradition and by the grand nineteenth century Cavaillé-Coll school. The tonal finishing was by David Wilson and Michael Butler and Nicolas Kynaston was the consultant.

Since its installation, the organ has won plaudits from organists all over the world and is considered to be one the finest in the country. It has featured on recordings by David Saint, Henry Fairs and Paul Carr and been broadcast on Radio 3. The organ is also used extensively for teaching and masterclasses.